What #BIF9 and Burning Man Taught Me About Transformation – Part I 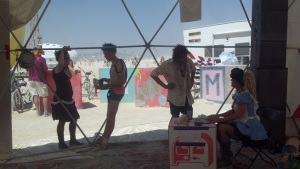 Registration Desk for our “Transform Learning” Unconference at Burning Man 2013

I spent the last week of August at Burning Man, and two days in September at Saul Kaplan‘s Business Innovation Factory Summit (BIF-9). On the surface, these two events couldn’t seem more different – the former is a counterculture festival of art and technology and spirit in the middle of the barren Nevada desert, whereas the latter is a traditional conference with TED-style talks punctuated by opportunities for business-card networking — in metropolitan Providence, Rhode Island.

So why did I emerge from each of these vastly different experiences with the exact same, buoyant, intellectually inspired feeling? I’ve been curious ever since my plane touched the ground at DCA last week, and I emerged from the jetway with the same bittersweet resignation that I’d need to return to the “default world” in the morning. Granted, there’s a little bit of overlap… Peter Hirshberg, one of my 2013 neighbors from Playaskool, gave a great BIF talk about “retribalizing the city” and specifically cited Black Rock City as the kind of vision for the future that might have been celebrated at a World’s Fair of the past. Tony Hsieh, the CEO of Zappos, also briefly noted the shared vibe of the Maker movement, Burning Man, and BIF when he was on stage — a vibe he aims to capture in his Downtown Project in Las Vegas.

But what’s the overlap? Why did both events inspire similar feelings in me?

Thanks to BIF-9 (and @AngelaMaiers), I remembered that I am a genius and the (default) world needs my contribution! And when Matt Murrie of What If? published his article yesterday on the Huffington Post, he provided another clue:  He reminded me that the spirit of BIF is easily captured by the phrases on those giant yellow slides that stay up on the screen in between BIF talks: think transformation, and try more stuff.

Think transformation! Try more stuff! And I’m needed… I’m an important part of all this!

That’s precisely how I felt as a resident of Black Rock City… and as a member of the BIF community sitting in the Trinity Rep theater. But the real secret sauce is… well, I’ll save that reveal for the end 🙂

First, some observations about the shared vibe between Burning Man and BIF:

Burning Man is for absolutely everyone. Everyone. That’s what Radical Inclusion means. If you’re a starving artist, you should go. (if you want to, of course!) If you’re a plumber, you should go. If you’re a billionaire, you should go. If you’re a Saudi Prince that can only go if a turnkey camp is provided for you, please, please come. I’ll make you a sandwich. If you believe you’re a member of the class of people who actually deserve to be there, well then I definitely want you to keep going. One day, you’ll get it. Elitism in all forms distracts us from the truth of our common humanity.
— Dustin Moskovitz, in “Radical Inclusion vs. Radical Self-Reliance at Burning Man“

At BIF, I noticed that people tend to just naturally accept and honor differences – to get excited about differences, in fact – because if we’re different, we’ve got unique perspectives to share with one another! I met Jeffrey Sparr and Matthew Kaplan, for example, from PeaceLove Studios. They want to remove the stigma associated with mental illness so that people who need help are more receptive to getting it – and with support, can contribute their own gifts to society.

As a personal example, after having a rather open and vulnerable conversation with Greg Satell and his wife Liliana over beer and oysters (where I shared some things about myself that I ordinarily would be completely hesistant to admit to anyone) — Greg’s body language told me he was clearly a little bit uncomfortable. For a moment, I thought I’d misjudged the openness of the BIF crowd. I started to feel hesitant, weak, as if I’d miscalculated and really shouldn’t be making myself vulnerable. But then he spoke up: “Well, I can’t say I feel the same way for me, but if that’s what works for YOU – I’m glad you’ve figured out a way to make it happen.”

Greg’s response, for me, encapsulated the secret sauce of BIF, of Burning Man, and of transformation in general… which I’ll talk more about in a day or two in Part II.

(Ahhhhhhh… the anticipation! Yes, I’m doing this on purpose.)

I'm Nicole Radziwill, and I advise CxOs as they scale their organizations from $10M to $100M. I got my PhD in Technology Management (Quality Systems) from Indiana State University in 2009 and have dragons in my glass. I taught Data Science and Production Systems in the Department of Integrated Science and Technology (ISAT) at James Madison University (JMU) from 2009 to 2018 and spent 15 years in technology management before then.