A Simple Intro to Q-Learning in R: Floor Plan Navigation

This example is drawn from “A Painless Q-Learning Tutorial” at http://mnemstudio.org/path-finding-q-learning-tutorial.htm which explains how to manually calculate iterations using the updating equation for Q-Learning, based on the Bellman Equation (image from https://www.is.uni-freiburg.de/ressourcen/business-analytics/13_reinforcementlearning.pdf):

The example explores path-finding through a house:

The question to be answered here is: What’s the best way to get from Room 2 to Room 5 (outside)? Notice that by answering this question using reinforcement learning, we will also know how to find optimal routes from any room to outside. And if we run the iterative algorithm again for a new target state, we can find out the optimal route from any room to that new target state.

Since Q-Learning is model-free, we don’t need to know how likely it is that our agent will move between any room and any other room (the transition probabilities). If you had observed the behavior in this system over time, you might be able to find that information, but it many cases it just isn’t available. So the key for this problem is to construct a Rewards Matrix that explains the benefit (or penalty!) of attempting to go from one state (room) to another.

Assigning the rewards is somewhat arbitrary, but you should give a large positive value to your target state and negative values to states that are impossible or highly undesirable. Here’s the guideline we’ll use for this problem:

We’ll start constructing our rewards matrix by listing the states we’ll come FROM down the rows, and the states we’ll go TO in the columns. First, let’s fill the diagonal with -1 rewards, because we don’t want our agent to stay in the same place (that is, move from Room 1 to Room 1, or from Room 2 to Room 2, and so forth). The final one gets a 100 because if we’re already in Room 5, we want to stay there.

Next, let’s move across the first row. Starting in Room 0, we only have one choice: go to Room 4. All other possibilities are blocked (-1):

Continue moving row by row, determining if you can’t get there from here (-1), you can but it’s not the target (0), or it’s the target(100). You’ll end up with a final rewards matrix that looks like this:

And run the code. Notice that we’re calling the target state 6 instead of 5 because even though we have a room labeled with a zero, our matrix starts with a 1s so we have to adjust:

You can read this table of average value to obtain policies. A policy is a “path” through the states of the system:

To answer the original problem, we would take route 2-3-1-5 or 2-3-4-5 to get out the quickest if we started in Room 2. This is easy to see with a simple map, but is much more complicated when the maps get bigger.

Overview: Reinforcement learning uses “reward” signals to determine how to navigate through a system in the most valuable way. (I’m particularly interested in the variant of reinforcement learning called “Q-Learning” because the goal is to create a “Quality Matrix” that can help you make the best sequence of decisions!) I found a toy robot navigation problem on the web that was solved using custom R code for reinforcement learning, and I wanted to reproduce the solution in different ways than the original author did. This post describes different ways that I solved the problem described at http://bayesianthink.blogspot.com/2014/05/hopping-robots-and-reinforcement.html

The Problem: Our agent, the robot, is placed at random on a board of wood. There’s a hole at s1, a sticky patch at s4, and the robot is trying to make appropriate decisions to navigate to s7 (the target). The image comes from the blog post linked above. 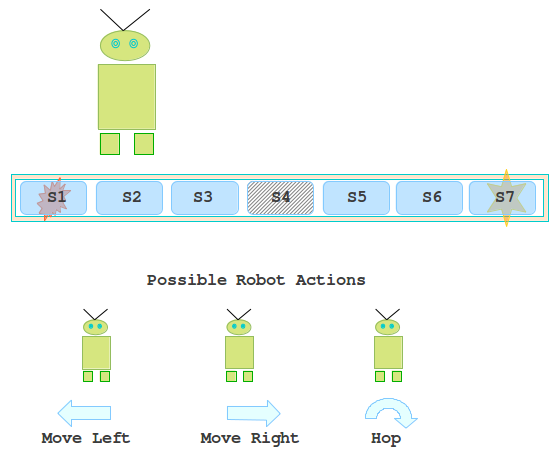 Solving a RL problem involves finding the optimal value functions (e.g. the Q matrix in Attempt 1) or the optimal policy (the State-Action matrix in Attempt 2). Although there are many techniques for reinforcement learning, we will use Q-learning because we don’t know the transition probabilities for each action. (If we did, we’d model it as a Markov Decision Process and use the MDPtoolbox package instead.) Q-Learning relies on traversing the system in many ways to update a matrix of average expected rewards from each state transition. This equation that it uses is from https://www.is.uni-freiburg.de/ressourcen/business-analytics/13_reinforcementlearning.pdf:

For this to work, all states have to be visited a sufficient number of times, and all state-action pairs have to be included in your experience sample. So keep this in mind when you’re trying to figure out how many iterations you need.

Here’s how you read this: the rows represent where you’ve come FROM, and the columns represent where you’re going TO. Each element 1 through 7 corresponds directly to S1 through S7 in the cartoon above. Each cell contains a reward (or penalty, if the value is negative) if we arrive in that state.

The S1 state is bad for the robot… there’s a hole in that piece of wood, so we’d really like to keep it away from that state. Location [1,1] on the matrix tells us what reward (or penalty) we’ll receive if we start at S1 and stay at S1: -10 (that’s bad). Similarly, location [2,1] on the matrix tells us that if we start at S2 and move left to S1, that’s also bad and we should receive a penalty of -10. The S4 state is also undesirable – there’s a sticky patch there, so we’d like to keep the robot away from it. Location [3,4] on the matrix represents the action of going from S3 to S4 by moving right, which will put us on the sticky patch

Now load the qlearn command into your R session:

Run qlearn with the HOP rewards matrix, a learning rate of 0.1, a discount rate of 0.8, and a target state of S7 (the location to the far right of the wooden board). I did 10,000 episodes (where in each one, the robot dropped randomly onto the wooden board and has to get to S7):

The Q-Matrix that is presented encodes the best-value solutions from each state (the “policy”). Here’s how you read it:

First, I created an “environment” that describes 1) how the states will change when actions are taken, and 2) what rewards will be accrued when that happens. I assigned a reward of -1 to all actions that are not special, e.g. landing on S1, landing on S4, or landing on S7. To be perfectly consistent with Attempt 1, I could have used 0.01 instead of -1, but the results will be similar. The values you choose for rewards are sort of arbitrary, but you do need to make sure there’s a comparatively large positive reward at your target state and “negative rewards” for states you want to avoid or are physically impossible.

Next, I installed and loaded up the ReinforcementLearning package and ran the RL simulation:

Now we can see the results:

If you tried this example and it didn’t produce the same response, don’t worry! Model-free reinforcement learning is done by simulation, and when you used the sampleExperience function, you generated a different set of state transitions to learn from. You may need more samples, or to tweak your rewards structure, or both.)